New “Chain Law” for Passenger Vehicles on I-70 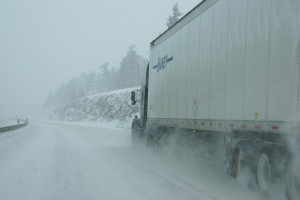 Anyone driving on Interstate 70 in the winter weather, and especially on a weekend, has likely experienced the traffic gridlock that turns an hour and thirty minute commute to or from the mountain ski resorts and Denver, into a three or four hour, or sometimes longer nightmare of a drive. House Bill (HB15-1173) is meant to help alleviate that congestion and danger by requiring passenger vehicles traveling on Interstate 70, from November 1 to May 15 between Morrison and Dotsero, to comply with certain tire traction specifications like the tire chain law for tractor trailers.

If passed the bill will require passenger vehicles to be equipped with tire chains or a similar “a traction control device,” or four-wheel drive with adequate tires (i.e., tires imprinted with the mountain-snowflake symbol or the “M+S” or “M/S” and a tread depth of at least four thirty-seconds of an inch) for the conditions. Failure to comply will result in a $100 fine and a $32 surcharge.