Is Music a Distraction to Drivers?

Most of us spend a decent amount of time in our cars each day (though it’s summer now so I’m riding my bike as much as possible!). Commuting around the metro area isn’t much fun, especially If you’ve got to travel during rush hour. Music is definitely one thing I look 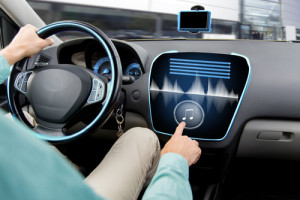 forward to while in my car. I’ve noticed that in addition to cell phones, other drivers are really into their music while behind the wheel. There have been plenty of times I’ve been able to hear the music in the car next to me, even with my windows up, and I’ve witnessed many other drivers wailing away to their favorite song. I started to think about the effects music has on drivers and if it’s a serious problem or not.

As you might’ve guessed – this is a complicated issue. Listening to music tends to involve a lot more than just using your ears, especially nowadays with so much technology in the cabin. Clearly it’s problematic when people are looking at their phones or stereo for an extended period of time to select a song or change the channel. This issue could be avoided by using voice commands, if your vehicle or music playing device has voice command capabilities, or preselecting a playlist before setting out.

Many studies have been conducted around the safety of listening to music in the car, and the results are at best conflicting. A 2013 study out of Ben-Gurion University in Israel concluded that young or new drivers make a significant number of mistakes when listening to music they like. The mistakes are reduced when no music is played at all, but the fact that they still make them is concerning. However, when they listened to music selected by the researchers, driving improved. The primary reason is tempo – the younger drivers typically selected upbeat, fast-paced music, while they were given softer, slower music by the researchers.  The answer to the question “Is music a distraction?” is becoming apparent; it depends.

Researchers from the Netherlands asked drivers between 19 and 25 were asked to make playlists of familiar songs they enjoyed and tasked with driving along a simulated road with predictable traffic. Those who listened to their favorite music responded to changes in the lead car’s speed better than those driving in silence. Under normal conditions, the music improved alertness and overall ability – but researchers point out that a stressful situation may change things.  According to researchers at Memorial University in Newfoundland, it’s not the type of music that matters, it’s the volume. Anything over 95 decibels (about the noise of a motorcycle from 25ft) reduces reaction time and impairs ability.

The fact is, none of these studies are perfect. They represent small sample sizes, and none of them control for every factor possible. What we can learn, though, is that music can be a distraction while you’re driving, if you let it become one. The most important thing to do when driving is use common sense, and make the choices that best allow you to drive in a safe manner.

Let’s review a few steps for enjoying your tunes as you cruise:

Remember your commitment to keeping yourself, your family, and others safe when you’re behind the wheel. Listening to music is fine, just be sure you’re not getting carried away and can still focus on the road. The last thing you want to do is injure someone else because you were too focused on Billy Ray to avoid the collision. And as always, if you need to talk about a recent injury from a car crash please contact us for a free consultation to learn your legal rights.